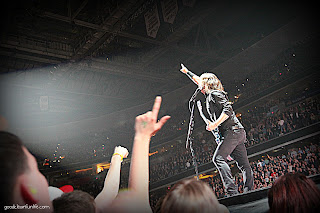 Almost 6 years ago, after going through a turbulent time in my life, dealing with some personal struggles, I began listening to the Foo Fighters religiously. I forgot about that time until Friday night when I was standing feet away from Dave Grohl, documenting the experience with my camera. The songs that helped me through were My Hero and Times Like These, still some of my favorites today. Since that time, much has changed in my life, all for the better, including building GoodCleanFunLife to what it is today.

Friday night in Washington D.C. began with patiently waiting along with many other photojournalists, all with more experience than I at this point, for our photo credentials. The Joy Formidable was the first act, an amazingly energetic group from Wales with a spunky female lead. Being my first time taking photos in such a large venue, I was unsure how it would all go down. The area we were allowed to photograph from was very narrow, half of us on one side and half on the other, with the stage a couple feet over our heads. During the first act, it was time to adjust for the situation and make the best of it! 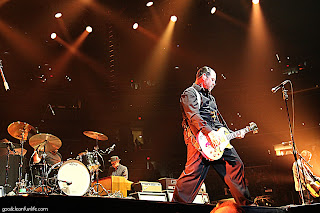 Social Distortion was the second act, and I decided to try the other side of the stage to photograph, which worked out well to get some great shots of Mike Ness. I finally felt at ease, confident in my ability for a change. The first three songs seemed to fly by, and we were out again waiting for the Foo Fighters to take the stage. Just as I knew would be the case, they stormed the stage with the energy that made me fall in love with them and their music. You can’t help but want to move, which proves difficult when trying to get as many clear shots with a camera in low light as possible. Once the 3 songs were over, I went and checked my camera and headed to my seats…even though the seats were high above, the experience was still incredible. I had heard that they played in the previous shows, for an hour and 45 minutes, so when they left the stage after 2 hours, and came back for a 5 song encore, I was elated! It was during this encore, that Dave Grohl played Times Like These acoustic, and brought me to tears. I have always felt that music can move you, both physically and emotionally, but never was it more apparent than when I heard that song live.