Posted at 13:29h in Odd Todd by Natalee DeHart
0 Likes

I have embraced the Social Media platform  – namely in the form of this blog to help …. to promote ..to, well have fun.  Lets be honest, this blog is just one step beyond when you talk into the mirror with a hairbrush.   It is unlikely that anyone is taking you as seriously as you are taking yourself at the moment.  But I see the value in it and the response that we get is pretty favorable.  But I will never take myself too seriously.

I have heard complaints that social media is too narcissistic, or that it is better to engage with people in person, or that it is just another bubble that is going to pop.  I prefer to live in the moment and have fun with it.  I tried an experiment the other day while at a social function, where there were actual people there. Here is what I did  – send out a post for someone to come sit on the couch with me.  I was very tired and wanted to chat and catch up but my feet were killing me, so I post on Facebook and Twitter “come sit with me”. 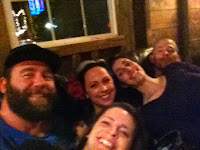 It seemed unlikely that it be successful.  It would have had to have be someone at that particular gathering, seen the post at the time I posted it and responded almost right away.  I snickered to myself that there was no way that this would happen.  Already formulating a clever anecdote to tell on my podcast or radio show or blog post.

To my surprise it worked.  Bryan saw the post and came to sit down and confirmed he had saw my message.   The funny thing is that two people sitting on the couch in real life garners a lot more attention than one person tweeting about it.  The other people that came over would not have unless the first had seen the post. Keep in mind that this proves absolutely nothing, but a good time was had (by the couch people).   So next time you are at a party that I am also at i’ll keep you posted so we can talk in person.