22 Mar Rock On the Western Shore: Pop Evil and Silvertung

Posted at 10:00h in Entertainment, Gallery by Natalee DeHart
0 Likes 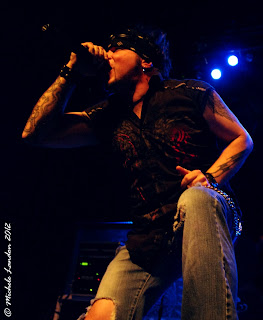 Friday, March 16th, 2012 a local Baltimore band, Silvertung, opened the show for national recording artist, Pop Evil, at Rams Head Live, Baltimore. Pop Evil is on a national tour promoting their newest album War of Angels. Some of their hits include: Last Man Standing, Bosses Daughter, and The Monster You Made Me.

Silvertung is a local Maryland band hailing from Baltimore. Their bassist, Skoot, is a local Eastern Shore resident. Silvertung is currently in the studio finishing up their second CD with the expected release to be in the late summer or fall. Their first CD “The Pawn” was released in 2005 with fan favorites of “Slow Me Down”, “Lies”, “I Am” and “Dig”. They have been teasing their Silvertung Nation fans with “Deja Vu” expected to be on their upcoming CD. Silvertung has also shared the stage with Godsmack, Disturbed, Megadeath,Trivium, Machine Head, Drowning Pool, LA Guns, Charm City Devils and many more national acts. Silvertung is sponsored by Jagermeister and last summer they opened the entire Rock Star Energy Drink Mayhem Festival at Jiffy Lube Live in Bristow, VA.

Silvertung got the crowd rocking that night to start the show with a set of all their originals.The crowd was singing along with every song!  Many of the Tung Nation showed up to support these great local guys. It was impressive to see and as I stood in line waiting for the doors to open, I talked with Silvertung fans and entire families there to see Silvertung, as far as from Western Maryland and also local fans from Cambridge traveled up for the show and supporting Silvertung.