Posted at 12:00h in The Arts by Natalee DeHart
0 Likes

What could you fit in an 8×10 space?  This is the question that is posed by local artist Little Chico as he calls on all his artist friends both locally and from the major metropolitan feeders.   The Second Annual 8×10 art show will be happening this week at Six Eleven Salon and Gallery at 9935 Steven Decatur Highway on Saturday, hosted by Jill Ferger & Little Chico. The event is from 6 to 9 pm at the Gallery, with music to follow at Trader Lee’s.

Ferger and Chicos commitment to the independent art scene is evidenced not only from their monthly schedule of art shows but the fact that all commission of work sold at this show goes directly to the other gallery down the street. Punk Rock Fish, run by Matt Dove, which played host last year. 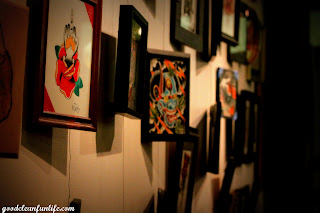 The question at hand is whether this area is ready to support the independent and alternative art that will be showcased on this Saturday from 6-10. One could argue that the only art that the eastern shore is known for is dune scapes and Assateague pony painting.  Art shows put on by the local alternative art supporters have been going on in some form or another for the last couple years and seems to get better and better with each reincarnation.

I have often said that the talent in this area is higher per capita than any major cultural center.  The art community is just getting better at connecting and promoting each other.  The show at Six Eleven is a fine example of just that: painters, writers, poets, actors….we have got them coming out our “assateague.”