Posted at 11:00h in For the Love of Good Food by Natalee DeHart
0 Likes 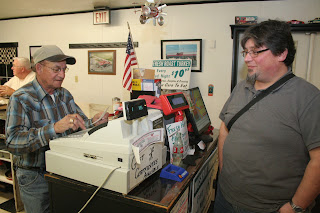 Before I tell you the tale of Todd, Tony and the muskrat feast, it’s important that you have a little backstory:
Although I am not a vegetarian in the literal sense, practically, I am. Nearly 10 years ago I developed a pretty strict criteria about eating meat that restricted me to eating what I’ll call non-production meat the shorthand for which is, if I know who killed it, I’ll eat it. As a result I’ve have very little success getting meat because — as you may or may not know — if a producer is not slaughtering by the thousands meat is very expensive.

Over the last year, however, because of connections I’ve cultivated through my work at the Bayside Gazette, I’ve had access to local producers from whom I bought the occasional duck or chicken. Before that the only meat I had with any regularity at all was from friends or neighbors who had extra deer they were willing to sell or share.
When meat is a rarity it tastes so much better and is well worth savoring so in the interest of full disclosure the fact that I haven’t purchased meat in a restaurant in nearly a decade might have affected how much, as it turned out, I love muskrat.

When I moved here from New Jersey in 1993 and heard of the muskrat phenomenon my response was predictable — we have plenty of muskrats in Jersey, I was fond of saying, we just leave them on the road when we hit them, we don’t scoop ‘em up for dinner. 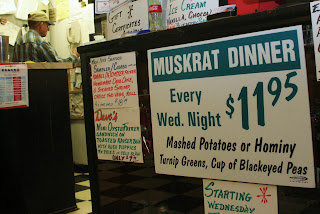 So the fact that, 19 years later I was all tucked in at Dave White’s Pittsville Dinette has an air of surreality that persists. It remains like a dream I had in which I was a different person and this alt-me went to places like Pittsville and ate things like muskrat. But after having pushed sustainability for so long, it was important, I thought, to put my money and my palette where my rhetoric had been. The fact is that the Pittsville Dinette offered as local a dinner as could be purchased and with the totally legitimate exception that the meal had the word “rat” in it, there seemed no good reason not to break down and join the club.

So Todd and I arranged to meet at the dinette for dinner at 6 p.m. Earlier in the day it occurred to me that I should check to make sure they had muskrat. We’d made a big enough deal about our outing on the Todcast and in the newspaper that if it turned out that the day’s muskrat delivery wasn’t sufficient our chance at Muskrat would have come and gone. It turned out to be a wise decision to call as the woman who answered the phone asked my name and how many muskrats she should hold for me. Yes, reservations are recommended for muskrat night at Dave White’s Pittsville Dinette.

The first thing I discovered upon arriving was that they don’t take credit cards, “We take checks,” the waitress said. She was friendly and trying to be helpful but I haven’t hand-written a check this century so I went looking for a cash machine. 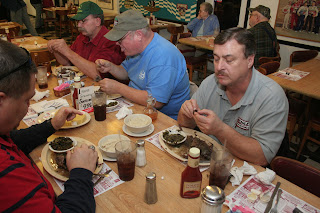 Todd was already on the scene snapping photos when I returned. He was, as was I, amped up about the proposed dinner. A state of mind I highly recommend to anyone considering joining the  muskrat eating club. The reason is, and there is no kind way to put it, the only think less appetizing than the name “muskrat” is the presentation. If you are not psyched up before your meal comes you probably won’t dig in. This is just a fact.

I showed up hungry, which is another good idea. I was hungry and buzzing with anticipation enough by the time we ordered that there was no question that I would eat pretty much whatever they brought out.
The waitress told us they didn’t serve beer. Todd was visibly disappointed but I was just confused. There had been a beer poster on the door and my brain had already assured my stomach that beer would be forthcoming. Not wanting to look like a liar in front of my stomach, it had my eyes scan the beverage menu. Certainly the waitress had no idea that they in fact did serve beer. Maybe she was new. She wasn’t. It’s almost just as well because — and I swear this is true — muskrat is more a wine dish.

Since it was adventure eating night I went with hominy and collard greens as side dishes. Hominy as far as I can tell, is inedible. Collards are better without vinegar. And that’s all you need to know about that.

When the muskrat arrived it was grey-black and soaking in its own juices. Todd didn’t look as if he was going to make it. He claimed that he wasn’t a meat on the bone guy and I’m not saying he wasn’t honest but later in the meal something happened that made me think it was both the bone and the meat he might have had a problem with.

Muskrat is served whole, minus the head. The body is about a foot long and grey-black. I know I mentioned grey-black and, frankly, I knew it would be grey-black before I sat down but the point can’t be overemphasized because it is really unappetizing. Like, Very. So if you’re committed to eating the muskrat — and I argue you should be — you should prepare yourself for getting past the way it looks. 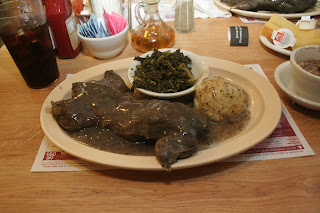 The four legs were still in crouching position. Dave said he really only eats the legs but that others commonly reduced the meal to bones (which I’d secretly vowed to do).

Todd said he’d hoped there would be move gravy. He was clearly struggling with how to attack the meal. In the end, he elected to take the same approach mannered people take with fish — he shredded it between two forks one bite at a time.

The waitress had brought a stack of napkins that was easily three inches high and topped them with two packets of wipes. It was clear from the amount of cleaning supplies that this was expected to be a less-than-mannerly process.
I grabbed a leg and ripped it from its socket. It didn’t make much of a sound.
Dave prepares it in a secret way — like, really secret — but my layman’s guess is there is plenty of both red and black pepper involved. Todd, who had asked for hot sauce, found it wasn’t necessary. The sauce wasn’t “hot” per se but had sufficient zip that qualify as spicy. The animal is par boiled and then cooked in such a way that the meat has an almost crock pot beef texture.

To be clear, it was really enjoyable. I will totally have it again and happily recommend that you do the same.

Many of the words that best describe muskrat are as unappetizing as the animal’s name or how it looks. The meet is sweet and at first. The aftertaste, such as it is and probably owing as much to the color and texture as to the particular flavor, is nearly reminiscent of liver. Nearly, in that it has a full flavor that is uncommon to meaty animals. 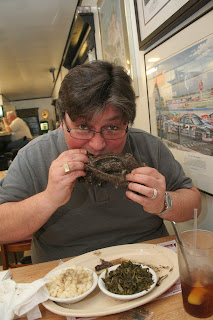 The key aftertaste flavor is mineral-ly. It’s fresh well water, tasting of the earth in a way that isn’t at all unpleasant.

On the other side of the table, Todd was running out of ways to shred up the meat and had moved on to the mashed potatoes — he wasn’t brave enough for the hominy.

Watching me pick apart the muskrat was too much for the poor guy. His face — and to be fair he was trying really hard to be polite about it — was twisted with involuntary disgust to see me holding a muskrat and gnawing on it as if it were a piece of corn. When I broke open the ribs he was done eating. Possibly for the rest of the week.

The only part of the animal that I left, other than the bones, was the side-flaps. My muskrat anatomy is a little rusty but I would expect that evolution wrapped their stomachs in cartilage and that texture even I couldn’t abide. 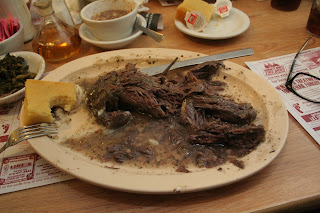 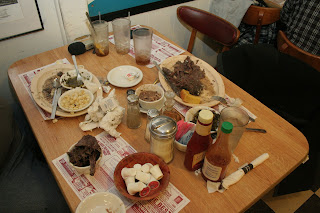 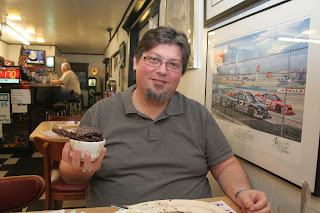