24 Jan Somebody is Going to Vegas – Ocean 98 Talent Show

Posted at 15:00h in Entertainment by Natalee DeHart
0 Likes

The Ocean 98 Talent Show is this week (7 pm Thursday at Seacrets, in Ocean City) so you should check the details on the website if you think you have a talent or trick to take the top prize, A trip for two to Vegas.  I know people around here can play a mean guitar and sing their hearts out, but last year there were a few oddities that were worth a second look.  There was a contestant that took a gold chain snorted it up his nose and pulled it out his mouth.  What?!?!  Yes that is not something you see everyday, unless you are already in Vegas, so that sort of act should at least get you there.  I would like to see the local sword swallowers step up and show their stuff ( insert crude comment here)  How about juggling chainsaws, eating a light bulb,  or making a lucid explanation of Dub Step..  All of these things you do not see or hear except when talent shows like this come along.  ( I’ve never hear an explanation of Dub Step, btw)

In college there was such an event, where the top prize was just the adoration of an entire Sorority.  That was a good prize back then.  I wonder if the talent that won that contest would fair as well on Thursday.  You be the judge.  My good friend won the coveted “Zlam-man” tile by balancing a chair on his chin all the while playing 6 degrees of Kevin Bacon without being stumped as people from the crowd shouted out contemporary actor names.  Witnessing this was like watch a pitcher throw a perfect game.  Come out Thursday and you may see something you have never seen. 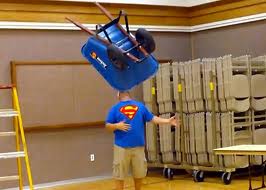