Posted at 12:55h in The Todcast by Natalee DeHart
0 Likes

by Tony Russo
of the BaySide Gazette/ Todcast network 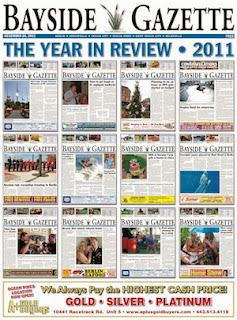 Mark Huey made a terrible mistake. The Bayside Gazette graphic designer was in the office this week while I was preparing for the big “Year in Review” Todcast and told me he thought it was canceled since Todd DeHart, my co-host, had been out of town.
The next thing he knew, he was co-hosting the Todcast at Burley Oak, sipping his root beer and giving one word answers to my leading questions.
Example:
Me: “I know you’re kind of into the extreme sport scene, what was it like to get the opportunity to shoot the Dew Tour?”
Him: “It was huge.”
Me:….
Him:…
By now I’ve edited out all the dead air but since he wasn’t prepared to be the co-host and since he doesn’t do a podcast every week, the first few minutes were a little awkward until he found his feet. After that, it was actually a pretty good show.
Since it was a Year in Review, though and since the paper is already filled with a Year in Review, rather than break down the highlights as I usually do here, I’ll give the State of the Todcast.
The State of the Todcast is returning to normal. It’s been a wobbly month for us and we’re still working on the live streaming aspect of it but we should be back to our old selves again by Tuesday and have  new site, format and all sorts of cool stuff to speak about by February.
When we started in April, there was a lot of dead air and “ums” and disorganization but over the ensuing months — and especially since finding a home at Burley Oak Brewery, we’ve really hit our stride and can be counted upon to produce a listenable show every week.
We’ve grown to just about 300 listeners per week and a lot of them are regulars and listen to the show the whole way through.
In this week’s State of the Beer, Bryan Brushmiller said he’s got a lot of plans for their big New Years Eve party. He said he doesn’t expect to have a ton of people until after the Ball Drop but insists he’ll be open as late (early?) as legally possible and looks forward to kicking off the New Year in a big way.
As for us, we’ll keep plugging along and hope to be more interactive as the year goes on. We might even have a party for our 53rd show in April, so stay tuned and have a happy and safe new year.