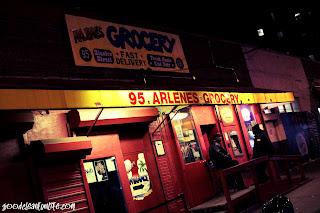 Red Datsun of NYC premiered their latest music video this past weekend, title Charm City. It truly is a must watch. We were lucky enough to catch them at Arlene’s Grocery in NYC this past December. Fun times were had, definitely check out the Artist Spotlight on them, and “like” them on Facebook as well!

New York, USA (2006 – present)..
Naming such bands as The Kinks, Rolling Stones, The Who, The Clash, The Specials, XTC, Wire, Pixies, Pavement among their influences, RED DATSUN has developed a rock & roll sound synthesized from the best of late 70’s punk, 80’s post-punk and new wave, and 90’s indie rock Red Datsun formed in New York City in 2006 out of a mutual love of analogue sounds, gigs played in dank tiny bars on crappy gear, the grind of the big city, the torn vinyl of your favorite booth, the smell of your jacket in the morning and the best wasted moments of a day.

The band is comprised of lead vocalist Miller, guitarist Dave, keyboardist Eric, bassist Gui and drummer Amanda. The music has been described as the sound of a 1 a.m. show on a Wednesday night at Siberia bar for an audience of your girlfriend and the bartenders, recorded off the board onto a fostex 4-track. You go home and sleep for 2 hours and then off to your job. Since the release of the band’s debut album in 2007, a loyal following has developed. Singles and EPs are constantly being threatened. “Devil You Know” has been used to back film trailers for “AAIFF2007” and has been featured in Red Datsun’s debut video, available now on YouTube.

RED DATSUN’s 10-song debut LP was recorded in the summer of 2007 and is available on your favorite online store, and on Riding Mower Records. Tracks can also be downloaded on iTunes, Rhapsody, Napster, eMusic, and on www.mypspace.com/reddatsun. All tracks were produced by Eric Bennett of The Hunt Studio (known for his work with P.I.C, SHIVA COPAL, and other Riding Mower Records recording artists) and mastered by audio engineer Tom Ruff at Asbury Media.