26 Mar Tales From the Chair: Being a Natural Blonde

Posted at 10:00h in The Tall Cheese by Contributing Writer
0 Likes 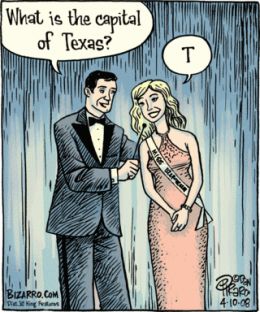 Being a natural blonde, I have always taken somewhat an affront to the dumb blonde stereotype. If you’re a blonde reading this you’re probably thinking, “Me too!” and if you’re of another hair color you might possibly be thinking, “Well I know quite a few blondes who could fall into that category!” I’ll admit that I do as well, but no more than dumb brunettes. 🙂

First of all, let’s take a little look at where this whole “dumb blonde” idea comes from. One theory is that the ancient Greeks and Romans so admired their flaxen-haired neighbors to the north, they would bleach their hair to make it blonde. Seeing as they didn’t exactly have the health standards we have today, a considerable amount of bleach repeatedly placed on the scalp and being inhaled could have some effect on one’s mental status.

Another theory is that in the Middle Ages, while the lords and ladies pranced around and shaded their delicate features, common people worked outdoors in the fields and became tanned and their hair grew lighter. As the lower classes didn’t usually have a formal education, tan skin and blonde hair became associated with unintelligent, lower class people. Of course these days tan skin and blonde hair usually means “vacation” or awesome job on the beach ;).

I have heard every blonde joke there is. In fact my brothers will tell stories of things I have said to other people as jokes…I don’t think it has anything to do with being blonde as it does that I just don’t always “get it”…a few examples of things I have said and at the time honestly was confused but can now share them because, well, they are kinda funny….

1. My brother Brock who is in the Coast Guard was stationed in CA and being transferred to Chicago….after driving cross country he called me to tell me he made it and was finally in Illinois…I told him I was glad he made it but thought he was moving to Chicago….silence on the other end with a simple answer Of “Chicago is in Illinois”….yeah I knew that.

2. Just recently was out with my good friends Ginger, Emma and Katie at the Greene Turtle. Looking over the menu I asked if they wanted buffalo wings…Emma replied she wanted the ones with no bones where I proceeded to say out loud “I wonder how they get the bones out of them”….

3. On a family trip with my dad and brothers as a girl driving to Vermont, I told my father I had to use the restroom. He told me we would stop at the next gas station. Upon seeing an Exxon sign that said “24 hours” I started crying saying I couldn’t wait 24 hours because it was too long….

4. Was on a double date in high school and we were leaving the movies. I was looking at all the upcoming movies and started complaining about how stupid names of movies were and what the heck would Rocky “V” be about…my date simply said “it’s Rocky 5, you know about the boxer”….yeah I knew the V was a 5 and not his last name…

Many people ask me how I think up some of my funny statuses, quite honestly I just think its how my brain was wired. Is it because I am blonde? Maybe. But don’t blondes have more fun anyways?!? 🙂 The best thing I can do is laugh at myself and share the moments where I wasn’t quite “thinking” or being “blonde” whatever it is. I can tell you that I usually keep those people around me laughing constantly with my sense of humor…but besides having God and love (DB) in our lives, isn’t humor the next best thing!!!