Posted at 16:00h in Krugers Korner by Contributing Writer
0 Likes

Being a chick is hard. We may be considered the fairer sex, but we are sure as shit the stronger one. In addition to being complete and total weenies when they’re sick, men never have to worry about their having their insides annually examined or pushing a tiny human out of their vagina or income inequality or their boobs trying to kill them.

It’s not just mommas and grandmas that get breast cancer. That is the message of the Pink Ribbon Pinups, a sexy, sassy, fundraising group founded last year by my beautiful friend and breast cancer survivor Brandi. All women need to be aware of their health throughout their lives, not just once they hit 40. The group raises awareness and supports breast cancer causes, with the hope of making a positive impact on other women who are diagnosed at a young age (Brandi was 26. She’s a badass). We dress in pinup style and throw parties. Because parties are fun. And cancer is an asshole.

I myself have a strong family history of breast cancer and am therefore considered “high risk”. I also have a strong family history of sarcasm and idiocy, but apparently there are no current tests to confirm these afflictions. So when I went for my second ever mammogram last week, I thought about how important the Pinups mission of awareness is. When I checked in, the woman at the desk asked what kind of mammogram I had last year. My response – “a regular one”. Apparently there’s more than one kind of boob squishing. See? I NEED Pinup awareness. Three AGH employees asked separately what I was doing there. “You’re so young,” they all said. They need Pinup awareness too. For the men out there who don’t have wives/girlfriends/daughters/sisters, a mammogram machine is essentially a pannini press for tits. Only instead of a delicious grilled sandwich, all you get are some glamour shots of your girls. My right one is bigger and a total attention whore.

This week is Brandi’s nine year(!) anniversary of being cancer free. I hope that with awareness and early detection, many other thousands of women will also reach that milestone and beyond. Help us celebrate by signing up to join the Pink Ribbon Pinups on April 22nd for the Ocean City Race for the Cure.  We are fun, young, hot, and we LOVE our boobs. Join our party if you love boobs too. And who doesn’t? I’m looking at you too, guys. 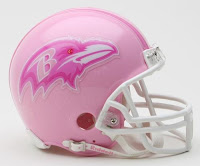 Health isn’t just important in October when the NFL wears pink. Help save second base! Although to be honest, I’ve never been entirely sure about the bases. I guess where you grow up determines how you rank them? I’ve always thought of boobs as more of a run-down between first and second, but I know some girls who would probably consider the boobs to be in the batters box. See what I did there? Boobs + sporty sex analogies = male attention to the cause. You’re welcome, PRP.

P.S.- On an ENTIRELY unrelated note, did anyone else see that dog that won best in show at the Westminster dog show? It looked like what you would get if Chewbacca raped an Ewok. Seriously, what was that??