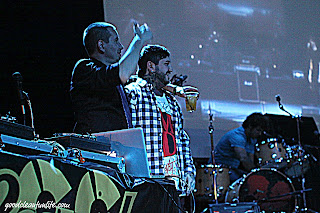 If Pirate Rob was a Roman emperor instead of a pirate, he could have turned that famous sentence for his birthday bash this weekend.  With 18 acts playing at Rams Head Live this weekend,  it was a jam packed music showcase.  The biggest mixed genre show in the Mid Atlantic.  Delmarva NightLife is Robs baby in the same fashion that Good Clean Fun is ours .  It is a labor of love and a burgeoning business, thats has spun off new bands and businesses.
Many of the standard acts in the DNL Family played all after noon and evening leading up to Pasadena taking the stage for the big finale.  There were some newer acts as well, primarily a Young MC to bring on the acts for the first half of the show.  That’s right, I jumped from being in front of the stage taking pictures to on stage bringing on bands.  Part of the reason I wanted to do it was because Natalee is the clearly better photographer of the two of us, the other part is the podcast and Djing gigs that lead to a spot on the radio, which in some ways lead to this.  So running my mouth has started to open up some opportunities.

The opportunity to be even a small part of this show is a great one.  Even though I like to poke fun at Pirate Rob from time to time the truth is that he does a real service for music in the region. I respect him for that.   In fact the show has almost  turned into a Mid Atlantic music conference.  With the number of sponsors and merch tables, and out of state attendees, Robert might consider selling booth space and turning it into a trade show.

Most of all it is a great night of music and fun.  Thanks for a great night and allowing us to do what we do , enjoy the show and take pictures.