Posted at 16:36h in Entertainment, Gallery by Natalee DeHart
0 Likes 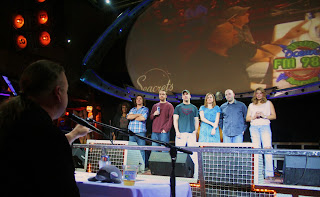 Last night was an amazing spectacle of talent at the Ocean 98 Talent Show held last night at Seacrets in the Morley Hall. Lots of good acts came out to show their stuff.  Namely  the show openers A Cappella / Doo Wop group Smooth Teaze. Even non contestants could “perform” of sorts at the Delmarvalous Photobooth. All but two were musical talents (in this town beer chugging could be its own show)  and it was only musical acts that moved on the the finals.

Rose Lee, Blake Haley (with the beautiful Daniele Hall), Tim Cyphers and the Animal, Adelia Price, and Tyler Murrell were the final contestants to face the Panel of Judges.  The Thunder Walrus, a comedian from north Baltimore, was the only real outsider that brought an interesting performance perspective to the judging.  He was joined by Ocean 98’s own the legendary DJ Batman and  Big Al Reno, clearly the “Simon Cowell” of the group ( if Cowell was a gambler instead of a producer.)

What it boiled down to was having the guts to get up and belt out some soul without the help of an instrument, or partner. That is exactly what Rose Lee did to get herself a trip to Las Vegas. I wonder if she needs an escort?

Thanks to BK for MCing and DJ Tuff for dropping in the Hair Band breaks between performers.