Posted at 17:00h in Krugers Korner by Contributing Writer
0 Likes
That song from the catchy Ravens Nation video produced by FREEstate Workshop recently has been playing on a loop in my head for days. Maybe it’s because I’ve watched it half a dozen times over the last few days, or maybe it’s because I’m mostly insane. Probably the first thing though. 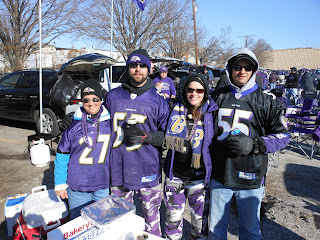 My family is really really really into Ravens football. It’s what we do. My brothers and parents and I all live hours apart, scattered throughout Maryland and Northwest Virginia, and we convene at our tailgate lot on game days as if we are holding some sort of Purple NFL Summit of Unhinged Krugers. It’s a family thing.

We are part of the extended Baltimore football family, that consists of so much more than just the players, coaches, training staff, and front office personnel. It includes the city government leaders who light up downtown in purple, the business owners who proudly display and sell Ravens merchandise, the people who wear their jerseys to work, and the kids who idolize the players. The team constantly recognizes this, and most of them will tell you that they think they have the best fans in the world. If Flacco wants to sport a decidedly creepy fu man chu, not only will we support him, we will wear them ourselves. It’s like being part of a giant purple family. The energy in the air during the playoffs if positively infectious.
On Sunday I had the opportunity to attend my first playoff game. Every game I attend at M&T Bank stadium is an exercise in joyful insanity, and this game served to magnify that feeling. It’s refreshing to spend a day with 71+ thousand other people who are as loony as I am. Every score, turnover, or big play that goes in the Ravens favor sends shock waves of tangible joy through the air like happiness radiating from a bliss bomb.
Some people will read this and have no idea what I’m talking about. But anyone who loves sports, and has ever loved and followed a player, team, or city will get it. If you’ve ever experienced the euphoric highs and crushing lows that come from being an athlete or a superfan, you get it. No matter who your team is, if you love sports, you get it.
Do I obsess about football? Maybe. Are there things in life that are more important? Probably. Leave me alone, it’s my thing. Everyone should have a thing, it makes life more interesting. Some people love fashion or cars or Farmville or midget wrestling because it makes them happy. Football makes me happy and is therefore my thing.
Trying to pick a favorite player gives me that feeling that parents must feel when asked which of their kids is their favorite. Unless their kids are assholes or something. Then it’s probably easy. For me it’s only a slightly hard decision. I love love love Ed Reed. I could tell you why, but that would be a whole other blog post and I’m not naive enough to think you care. When he had the game-ending interception on Sunday it happened right in front of where my brother and I were sitting, and it was the shit. It was the cherry on our Sunday (I’ll be here all week).
This is something that I honestly could talk about forever but I won’t. As a matter of fact, if you’re still reading I give you props. Here is a short snippet (is that a word?) from Sunday. The crowd chanting the rhythm from Seven Nation Army was dubbed in over the crowd noise during player intros because my maniacal screaming from behind the camera should not be heard by human ears. Enthusiastic? Yes. Sexy? Decidedly no.