12 Dec My Experience With Football

Posted at 15:00h in The Tall Cheese by Contributing Writer
0 Likes 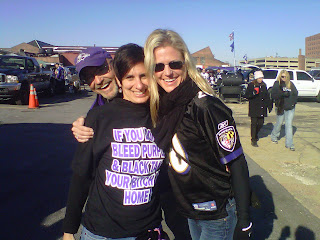 As far back as I can remember I have always been considered a “leader” type.  I planned the neighborhood plays, organized TV tag and even decided who played which character during our game of Thunder Cats or Teenage Mutant Ninja Turtles.  But when it comes to football, I was always the “follower”.

Growing up in Annapolis with parents who loved the NY Giants, at home they were who I cheered for and if I was with friends I usually cheered on the Redskins. As I got older I would choose my team based on the color jerseys I liked best (and of course who had the greatest looking backsides! (DB).  With Navy blue and Green as my favorite colors, you can imagine I was usually the odd man out at parties in MD.  Some of the closest people in my life have VERY different opinions on teams.  My older brother love’s the Detroit Lions (don’t ask me, I don’t get it either).  Two of my dearest girlfriends love the Steelers and the Patriots.  As I have reached adult hood I have finally flipped the coin and decided to not take on the role of “leader” or “follower”, but to be an “individual” and become a Raven’s fan.  Now I will admit this was mainly because my 10-year-old daughter Remy is such a huge Raven’s fan. She basically told me I was a “fool” if I didn’t like them when she was 5.  And now I got to experience my first Raven’s bus tour, tailgating and a live game with my good friend Ginger who I might add has a tattoo of the Saints and is a HUGE Colt’s fan, who we happened to have played this particular game!

So here it is; game day, get up put my Raven’s gear on and head to the bus which leaves at 7:30am with Ginger.  Since this particular game we are playing the Colts, I mentioned to Ginger that although I don’t know much about football, I do know you don’t get on the home team bus wearing the opposing team’s jersey!  With that being said, “if you wear it, I don’t know you”.  She did the right thing and wore black. Although by the time we got there and she had a few beers in her, we managed to get her in a Raven’s shirt! But that’s a whole different blog in itself!  I have no idea at this point what to expect.  Once we are on the bus, which I might add is swarming with purple right down to the toilet paper, the people riding with us are all geared up and ready to party! The first beer was cracked by 8am, and food was being passed around from seat to seat.  It was literally a moving party bus!  And I would like to add that Raven’s fans are SO MUCH FUN! They live and breathe purple.

Once we arrived at the stadium, the bus was parked and all I could see from one end to the other was the biggest party ever.  These people don’t mess around…from satellites placed on their vehicles to grills the size of what you would find in a restaurant, the party had begun! We made our way to a place called “the Warehouse”, which has about 4 or 5 bars inside of it and from what I hear is only opened on game day.  The thing that surprised me the most about this place was that the line to the men’s bathroom was a mile long! I didn’t even have to wait in line to use the women’s restroom. I mentioned to some of them standing in line that there had to be something going on in that bathroom, to which they replied “yeah a lot of drinking and peeing!”….ok then….off to the stadium….

WOW! This place is insane! You can’t be in this place without feeling the love of your fellow man.  Could it be that 99% of them are drunk?, yes probably, but who cares, when you are there, as long as you have the right colors on, you are family! I had more money and beer pass through my hands then I would ever know what to do with and none of it was even mine.  Needless to say the game was great and we of course won.

On the bus ride home people were talking about where they were going to go to watch the 8pm game.  And so the party continues.  I can honestly say this was a fun and great experience and I can see how people just go to the games to tailgate.  That was certainly my favorite part of the day!

Going through this experience I do understand how one sport can bring so much enjoyment and fun to everyone.   I also learned a lot more about the game and what terms stand for then I knew prior.  I mean a “Tight End” to me is what I get after doing 100 squats, how would I know it’s an offensive player who serves as a receiver and also a blocker? Anyway, I would definitely recommend if you haven’t experienced going to a football game, that it is something to add to your bucket list! CAW!