Posted at 13:00h in Artist Spotlight, The Todcast by Natalee DeHart
0 Likes 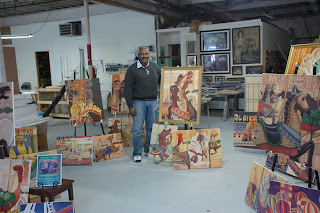 We’re happy to provide a little background noise this week. The recording quality is the same but as the weeks go on we’re beginning to attract a bit of a crowd at Burley Oak where Todd DeHart and I do the Todcast each Tuesday. I’ll mention that again in another 400 words or so so you don’t forget.

The point is that this week we got to interact with the crowd a little bit and it made, I think, for a more dynamic show. You’re welcome to disagree as long as you give it a listen first.

Our guest was kind-of-local-artist Patrick Henry. I say kind of because the difficulty he presents — both Todd and I thought — is that his shows aren’t restricted to the area. They’re barely restricted to the region, so we supposed that there was, like, some new title he wanted.

Patrick wasn’t biting. He loves being a hometown kind of guy, driving the hometown truck for which he takes a little ribbing. John Barrett, who was playing darts next to us, tried to sell him another car, to which Patrick replied, “I bought this one from you. You should have sold me a lemon if you wanted me to buy another one so soon.”

These are the kinds of exchanges we like having, and a particular function of the live show.

When I got the assignment to write the Patrick Henry story I figured there was nothing left to say. I was wrong and glad of it. On this week’s Todcast we hop around in time a bit but mostly we discuss Henry’s prolific career and especially the new work he’ll be showing at the Globe Saturday.

Patrick was one of the small group that jumpstarted the Arts and Entertainment District in Berlin and, especially to hear him tell it, the change was unnoticeably slow over the last decade but stands in stark contrast when compared side by side. It’s not only the businesses, many of which have, in fact, remained the same and continue to thrive. The biggest change has been the quality of the art available.

It takes more than a collection of work to get a show in Berlin nowadays; it takes a collection of quality work. By upping the ante, and we really go on about this at length, the town has become something of a surprise.

From the outside it is a standard issue small town but as you get into the art scene, it becomes apparent that the old-timey facade belies not only a vibrant art community but also one where novelty gives way to legitimate art.