15 Sep Enthusiast, If You Please

Posted at 14:30h in Uncategorized by Natalee DeHart
0 Likes

At first blush, you might say that political correctness has overstepped its bounds when you hear us ask on the Todcast that the thousands of people tooling through the area this weekend be referred to as motorcycle enthusiasts rather than bikers. But give it a second.
The television show “Sons of Anarchy” is a soap opera for bikers. If you’re not familiar, the show is about the trials and tribulations of a biker gang. Violent bikers are said to make up about one percent of people who own motorcycles. It is as reflective of reality as is “Days of Our Lives” in that people have families and sometimes they have crises.
The point is the number of people who can even begin to relate to either is infinitesimal, probably not even worth of the name “one percenters.” Motorcycle enthusiasts make up the more than 99 percent of the rest and almost certainly 100 percent of the people who have come to Delmarva for Bike Week.
The biker/enthusiast distinction is kind of a sore point for Loaded Gun Customs owner Kevin Dunworth, who joined Todd DeHart and I this week on the Todcast. 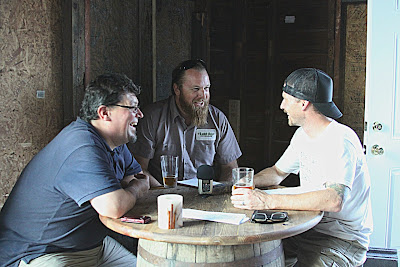 His point, and he made it better than than I have, is that Bike Week and particularly the brand new OC Bike Fest at the Inlet will probably be as similar to “Sons of Anarchy” as a weekend in the Hamptons would be to “Days of Our Lives.” The people kind of exist, but not here.
The novelty of the OC Bike Fest is that the organizers not only recognize that, but count upon it. Kevin has worked with Cliff Sutherland and his crew before and the same thing impressed him as impressed me when I spoke to them for the story (see Page 13) — these guys have a preternatural sense of the opportunities Bike Week presents.
The OC Bike Fest people are mostly interested in building something. Kevin pointed out that, not only did they design the event to be an aspect rather than the main attraction, but they hired local people and limited the number of vendors who might compete with local businesses.
Bryan Brushmiller, meanwhile, was on holiday so the state of the beer this week is this: They don’t believe you can continue to drink it faster than they can make it and they’re soldiering on.
Feel free to join us 5:30 p.m. each Tuesday for the Happy Hour Todcast at Burley Oak Brewery (special thanks to Steve Barrett, our first official audience member). If something tragic keeps you from joining us you can always check out the resulting recording Thursday afternoon by subscribing on iTunes. Fair warning before you listen: Put on your irony hats, kids. It’s all in good clean fun.