31 Aug Artist Spotlight on The Cheaters 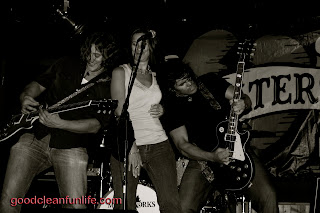 This weeks artist spotlight is focusing on The Cheaters. A band from my hometown area, that rocks it like no other. Each time I have seen them play, they are consistent and get the whole room going. The most memorable time was at Union Jacks in Columbia, randomly coming across them after attending a concert at Merriweather Post Pavilion. THAT was a fun time… I also wanted to spotlight The Cheaters as a birthday gift to my friend Ginger Fleming…she is a huge fan!

In only a few short years, The Cheaters have released two critically acclaimed CD’s, sold thousands of records, and played hundreds of shows throughout the U.S.A., not to mention successfully performing in Europe, Guam and Japan. The Cheaters have also shared the stage with such diverse national acts as ZZ Top, The Pretenders, Shooter Jennings, The Stray Cats, Ace Frehley, REO Speedwagon, The Wailers, and this past summer, were the opening act for Kid Rock and Lynyrd Skynyrd in Virginia. This is a band that has a little bit of something for everyone and any time The Cheaters play, you can bet they will leave the crowd wanting more.

The Cheaters’ live performance is a non-stop barrage of the band’s energy, talent and showmanship that draws the crowd in, and won’t let them go until they break a sweat. The band’s most recent album, “Midnight Run”, is a direct byproduct of the band’s raw power and musical talent. The Cheaters have also recently debuted a video for the single “Blow My Mind”, that is getting rave reviews and is generating unprecedented traffic. With each album this band gets better and better and every time you see them, The Cheaters’ live performance confirms what their fans already know, and the converted have just discovered; this is what rock and roll is supposed to be, and this is a band that’s here to stay.