Posted at 14:06h in Uncategorized by Natalee DeHart
0 Likes

Circling over Poor Man’s Canyon, at a depth of 200 fathoms (what the hell is a fathom, anyway?), 50 miles offshore. Previously calm conditions have turned ominous as charcoal storm clouds envelope our 42′ vessel and water spouts line the horizon in all directions. First mate Phil is muttering about the ocean tornadoes- apparently getting caught in one does not automatically equate to imminent death, but we do not want to get caught in one because they will “really mess your boat up bad”. What’s that he just said? I may want to go inside the cabin because conditions are likely about to get ugly? Errrr, thanks Phil. Now I feel much better. 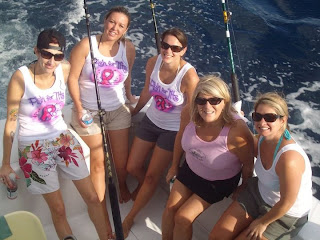 … Or so would have read my captains log from Saturday’s Poor Girls Open, had I been a captain or keeping a log at the time. Started 18 years ago by the late Captain Steve Harman, the gals-only tournament has grown considerably in size and popularity, raising over $100,000 over the past three years alone as part of the Pink Ribbon Classic series of events that raise money for breast cancer research. 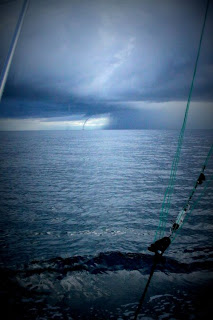 Not only was this my first time competing in the tournament, but it was also my first time fishing offshore in general. I was not prepared for the water spouts. In my head I had mentally prepared for all kinds of ills that could befall us out on the open sea; thunderstorms, impalement by a pissed off bill fish, pirate attacks, falling overboard, seasickness, rouge waves, or horror of horrors – running low on booze. But nobody told me about the #*%*$& water spouts. Phil certainly eased my fears in his oh so gentle, not at all gruff fishermanly manner

Despite hooking a 700+ pound ginormous blue marlin, then loosing said marlin when our line broke, we had a pretty kick-ass day. We reeled in a beautiful white marlin within about 45 minutes of having our lines in the water, and two respectable mahi’s a couple of hours later. Even though we didn’t get to reel them both in, hooking both a blue and white marlin in the same day is super rare (not unlike the sushi that I unironically consumed Saturday night once back on land). We also learned that mahi apparently mate for life (according to Phil), which made us kind of feel like assholes since there were now TWO broken-hearted single mahi dudes swimming about aimlessly. Both of ours were females, so it felt like a bad nautical romantic comedy, minus the comedy part. I suppose that makes it more of a romantic tragedy. Worry not, bleeding hearts – there are plenty of other fish in the sea. How refreshing to be able to take a horribly overused cliche’ so literally. On a totally unrelated note, the mahi fillets I had last night were delicious.

After the storms passed and the sun was shining through the beautiful clear blue skies, we all had our own opportunities to enjoy quiet and reflective Zen moments out on the open ocean. We saw spectacular rainbows, groups of majestic pilot and beluga whales, and nothing else around for miles and miles. It would have been the perfect time to observe how small and insignificant we really are in the universe, and ponder the meaning of life. Yet all I could think about was how long it would take for a shark the swim up from the depths and bite off all my appendages and leave me to bleed out, should I step on a fish hook and stumble overboard. Stupid Discovery Channel. Thanks for ruining my chi, Shark Week.

This year an impressive 88 boats competed in the Poor Girls, with the winning team taking home $27,000 in prize money. How’s THAT for being a bunch of girl anglers? My own team, Fish for Tits, did not finish in the money, but we had a great time raising money for a great cause that affects everyone, and that’s all that really matters. Plus, now we all have matching pink ribbon shirts that say Fish for Tits, which makes us the real winners in my book.