20 Jul Artist Spotlight on The Aggrolites 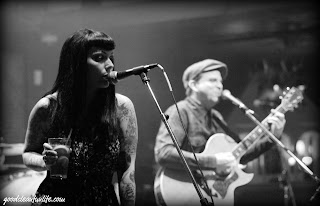 This upcoming Monday at Seacrets, here in Ocean City, MD you will have the amazing opportunity to see The Aggrolites play live, for a free show. We seem to get more and more lucky to have such amazing national acts coming to our beach town, that sometimes I don’t think we appreciate it enough. Some of you may have seen Jesse Wagner of The Aggrolites play an acoustic set at Fager’s Island this past spring for one of the first Deck Party’s. Local lovely, Jessica Stalter, joined him on stage for a couple songs, and we have some photos to prove it!

Our first opportunity to meet Jesse Wagner of the Aggrolites, was earlier this spring when he played an acoustic set along with The Electric Company at Fagers Island this spring. We are looking forward to seeing the entire band perform live at Seacrets this coming Monday.

The Aggrolites are more than a band, they are a movement unto themselves. They carry a banner-one created with their own hands. This banner reads: “Dirty Reggae”, and represents their signature fusion of reggae, soul, grit, and determination.

For nine years this dirty reggae bunch has rolled from city to city, across the pond, and up Main Street USA. They rally the kids, the parents, the students, the cops, the bosses, and the drifters. The people come, and they relish in The Aggrolites, their music, and the joy that comes with it all. The liberating rhythms and catchy grooves demand a return trip.

Out of the Los Angeles school of hard knocks, The Aggros have earned a Ph.D in “feel good music”. On the road, they educate with the thunder and punch of the reggae drums and bass; the ripping, soulful melodies of the organ and guitars; and Jesse Wagner’s voice–a perfectly intact gift from Otis, Sam, Ray, and Wilson.
The Aggrolites have a specific way of making music. They don’t overthink it; they don’t obsess over pop culture demands…They walk onto a stage or into a recording studio and “let it happen”. A culmination of inspiration from the road; from playing alongside music legends; and from the energy and motivation of their die hard fans.

The Aggros have shared the stage with:
Social Distortion, Madness, Rancid, Flogging Molly, 311, Michael Franti & Spearhead, Dropkick Murphys, The Vandals, Against Me!, The Aquabats, Hepcat, The Skatalites, Prince Buster, Derrick Morgan, and so on and so forth…