Posted at 14:04h in Uncategorized by Natalee DeHart
0 Likes 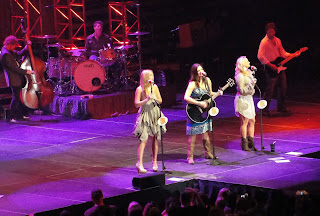 Sunday evening I had the really cool opportunity to get my country on with the lovely Brandi and Ginger, and see songstress Miranda Lambert perform at the civic center in Salisbury. The show opened up with a performance by Chris Young (*swoon*), the easy-on-the-eyes country baritone responsible for hits such as “Tomorrow” and “The Man I want to Be”. Chris rocked the stage and really set the tone for a great show. He got quite the reaction from the ladies in the crowd – so much so that my hearing still is not right from the bombardment of high-pitched squealing that ensued as a result of pretty much everything he did and said. Ladies, why do we do that? It seriously has to be dangerous to the ear drums. 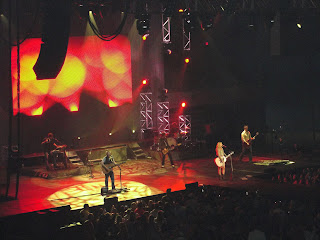 Miranda Lambert then took the stage and opened with her hit “Only Prettier”. When the lights first came up and illuminated her and her band, we were surprised at how tiny she looked up there on stage. Her pink guitar seemed to be as big as she was, but her set of pipes were more than big enough to fill the room. The recent Female Video of the Year award recipient at the 2011 CMT awards (for the sweet “House the Built Me”) rocked out in her cowboy boots and shotgun mic stand. Seriously. Her stand was a shotgun. How cool is that? In addition to her original hits, she also performed classic covers such as “I Love Rock and Roll”. Her energy was contagious.

Also taking the stage briefly was the newly formed Pistol Annies (consisting of Miranda and two other hot chicks), who performed their soon-to-be-released single “Hell on Heels”. I’ve always though that artists were supposed to make it big in a band and then ditch them to go off on their own, not the other way around. But then, Miranda Lambert has always unapologetically done things her own way. I like to think she’s the kind of country artist I would be, if I had an agent, the energy to be on the road all the time, and any vocal talent whatsoever.