13 Jun Recap of an Awesome Friday Night on Delmarva 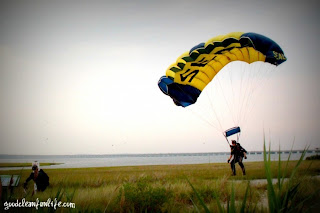 Friday evening began with a Kickoff to the Ocean City Air Show at Macky’s Bayside, with skydiving galore! A local was the first, who parachuted into the small bayside beach, and then served up a bottle of Jack Daniels Honey, in shot form. Followed by the 101st Airborne, Navy Seals and the guys from Red Bull.

After the festivities in Ocean City, we headed north to Dewey Beach to see Rock Bottom perform at the Bottle & Cork. KISS tribute band, that truly rocks out, and puts on one hell of a show.