04 May Artist Spotlight on The Phantom Limbs – Maryland Live Music 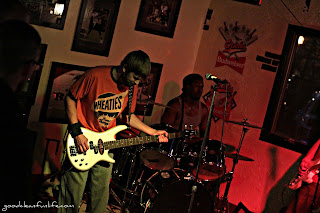 Local trio, The Phantom Limbs have a stocked schedule to say the least, performing in many regular spots around Ocean City MD, they are also heading to the other side of the bridge as well. Keep your eye out for this group who has a varied list of pop-culture and musical influences, and plays music for the love of doing so.

“Whether I shall turn out to be the hero of my own life, or whether that station will be held by anybody else, these pages must show. To begin my life with the beginning of my life, I record that I was born (as I have been informed and believe) on a Friday, at twelve o’clock at night. It was remarked that the clock began to strike, and I began to cry, simultaneously.”

Much like Dickens’ hero, the Phantom Limbs were born suddenly and enthusiastically, out of the remnants of a handful of Mid-Atlantic bands, each worthy of note, though some place else.

Composed of singer/guitar player Ryan Abbott, singer/bassist Kasey Briggs and drummer/miscreant slapper Randolph Showell, they pride themselves in having no pride, morals or dress code. They do, however, sport a conscious and an innocence that any dark vigilante justice seeker requires to combat the forces of evil, the very forces that would beget such a conflicted hero.

Musically, as is the way most wish to have a band described, they are influenced by Dick Dale, Ween, the Reverend Horton Heat, Southern Culture on the Skids and Primus.

A common cliche in the music biz, and one that makes the group cringe when local bands use it, is to say “oh, you can’t lump our music into one genre.” Ugh. To avoid that nasty little trap, the group characterizes their sound as Surf Punk – a neat marriage between the attitude and volume of punk and the reverberated tremolo waves of surf rock.

They got their name from a Stephen King book and not the popular Shins song “Phantom Limb,” though Ryan fist pumps the air when the radio plays that particular song.

Speaking of Ryan, you can find him before any of the group’s well-attended shows at Pepper’s Tavern drinking coconut chocolate chip milk shakes and playing Indian Jones Pinball. He plays the same alpine white American Strat with a maple neck that he has used with a plethora of bands, locally and not so local. He runs the Strat through a 65 Fender Twin, which gives the group their trademarked surf sound.

Kasey picked up the bass after dissembling Trailer Park Romeo, a local acoustic blues outfit. In order to start the 3 piece, Ryan forced Kasey through a series of letters written in cut-out magazine letters posted on Kasey’s door with a bone-handled dagger to pick up the low frequency instrument. After 4 years of pickin’ on that thing, it’s safe to say it worked out pretty well. Kasey spends his free time growing and harvesting his facial hair, and committing to memory the shape and size of each individual pretzel in a bag.

Randolph plays drums. Hard. He’s played in hardcore and punk bands in and around Ocean City for the last 15 years, and he gives the Limbs an edge that only that hardcore sound and a knuckle sandwich can drum up – unfortunate pun not intended. Randolph also enjoys laying the occasional smack-down on the unpleasant and the rude at area bus stops, the Post Office, or any place where civil unrest could escalate.

The Limbs have played up and down the east coast at nearly ever crumby bar you can think of. They’ve also released two E.P.s printed on 6″ vinyl (a fancy way of saying vinyl CDs) entitled Episode 1: Night of the Living Surf and Episode 2: Aberzombie and Flesh (we’ll give you two guesses as to which came first, genius). Both are available on iTunes, though nobody in the band has figured out what that means. They are currently at work with Tribemark Studios and WrightWay Studios on their third EP, a trilogy completer known as “Episode 3: Return of the DeadGuy.”

If you run into a Limb, don’t panic, simply state your name, occupation and date of birth. Then leave the Limb a brief message regarding a mundane task, ie. “I’m almost home, gotta stop at the store first.” Then tell the Limb “end of message,” and proceed cautiously around him. The Limb will likely be confused and will let you pass without harassment.