Posted at 09:38h in Uncategorized by Natalee DeHart
0 Likes 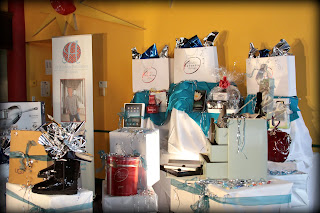 live. We told the doctor that wasn’t going to work for us
and 50% is attitude. We have attitude! (It’s April 2011! He shows no signs of tumors and he’s with us!) The PJ Aldridge Foundation began when we found lung cancer is the HIGHEST diagnosed cancer of all cancers with the LEAST amount of funding for research and awareness! The sigma attached needs to be LOST. PJ doesn’t have lung cancer from smoking, Laura from High Point, well; a host of others don’t have lung cancer from smoking either. But, at the end of the day, who cares if you smoked, doesn’t everyone deserve a chance? In less than a year since PJAF’s formation, the goals of awareness, funding, and the hope for a cure are becoming a reality. PJ Aldridge has become the unlikely face of lung cancer, sharing his story, and spreading PJAF’s positive message of “attitude is half the battle.” For more on PJ’s story please visit www.pjaf.org
The raffle for “PJ’s Favorite Things from Oprah” includes Dana Rebecca diamond earrings, a 2012 Volkswagen Beetle, an iPad, sparkling UGG boots, a complete set of Le Creuset cookware, a $1,000 gift card to Nordstrom and much, much more, with a total package value of $37,000! Raffle tickets are being sold as one ticket for $20.00 or 6 tickets for $100.00 One winner takes ALL items, and PJAF will pay the winners taxes. The foundation’s goal is to sell 100,000 tickets resulting in a minimum of 1 million dollars raised ONLY for lung cancer research and awareness.
Visit PJAF to purchase tickets beginning Friday April 15th. The raffle will end no later than August 30th, 2011.
Watch the video, produced by Jesse Campbell.