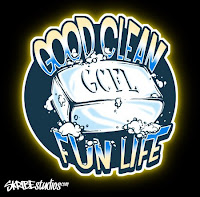 So happy to showcase this week’s Artist Spotlight, as he is not only a talented musician, he is also an incredible graphic designer. When we were looking to have someone create a logo for us here at GCFL, we reached out to Aaron to create something original and bold. Crazy thing is, we had it for almost a year before we actually started using it! Lots of compliments have come our way regarding the logo, and thought it was only suitable that we feature Aaron and Skribe Studios in our Artist Spotlight feature! Be sure to check out the write up, courtesy of Brandi Mellinger of the Ocean City Today, as well as music and images here…

Aaron Yealdhall is a unique individual. If you ask him how he became a musician, he’ll say he “bought his first real six-string over at the five-and-dime.” That guitar, he says, got stuck in a car door and splintered before he could learn anything worth listening to.

Asked to describe himself on his Facebook page, Yealdhall simply writes, “I have a red pencil box.” Odd? Maybe a little. But it’s all part of his image as an artist — and as an individual, for that matter.

“I get sick of bands who take themselves too seriously with these kinds of things,” said the 26-year-old singer/songwriter who calls Annapolis home. “I thought that being a little goofy with [this interview] could be a good idea, get people wondering if it’s real or not … I’ve always liked that kind of stuff. It’s worked on me when I’ve heard an odd story, even if it’s made up.”

Truth is, Yealdhall got his first guitar from his parents — not from the corner store.

“On my 16th birthday, my parents handed me a birthday card and car keys. It was a sick joke, cause the only thing in the garage was a Takamine acoustic guitar,” he said. “I immediately wanted to get even with them and start a Peter Frampton tribute band.”
A few years later, the now-graphic artist accidentally closed that guitar in the sliding door of a minivan. Determined to buy a new one, Yealdhall saved up money for about a year (working “several dirt summer jobs, including stints in eyebrow threading, a monkey farm, and TGI Fridays,” was how he originally told the story).
“With a new axe under [my] wing, the creative juices were flowing,” he said. “An entire album was written by fall and the first house party performance was on the books.”
Ten minutes before show time, however, his guitar was stolen by a guy named “Bean.” And that part is real.
“Yep, they called him Bean. He had an accomplice with a stupid name, too, like Jeff or something,” Yealdhall said.
So he borrowed a friend’s guitar and practiced on that. “I also picked up a mandolin at a pawn shop in Ocean City,” he said. “I liked the mandolin cause it was portable. I would keep it in my passenger seat and practice at stoplights.”
Later, Yealdhall took his material to the Annapolis open mic scene, where he met a standup bass player who goes by the name “Uncle Ben” and who provided him with a new set of strings. The nameless duo played together during a few open mic nights and even opened for a handful of local acts before joining forces with percussionist Dave Hart, who, Yealdhall said, “brought both energy and direction to the game.” Skribe was formed.
Armed with Yealdhall’s powerful, yet soulful vocals, Uncle Ben’s unique standup bass (which a fan once mistook for a converted crossbow) and Hart’s superintendence, the trio churned out the band’s first independent release, “Doin’ the Dirt,” which features 14 original songs “thick with loud stomps, radio-ready grooves and the occasional instrumental piece,” Yealdhall said.
Think guitar-driven melodies, a little bit of honky-tonk (minus the twang) and a smidgen of country, minus the broken-down truck and flea-infested dog. Or, as Yealdhall explains on the band’s MySpace page, “an optimistic Mississippi.”
The CD was released Sept. 25, 2009. It is the group’s only record as a trio.
Inspired by everything from “hardcore rap to dagger dancing,” Skribe’s sound has been compared to groups like Soul Coughing, The Black Keys, Bob Dylan and G. Love, Yealdhall said.
“Distorted acoustic guitar, simple lyrics, booming electric upright bass, and well-executed pocket drumming styles make this band a unique listen,” he said.