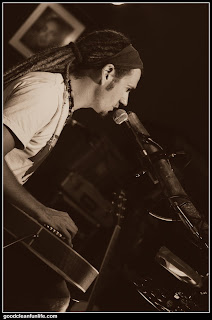 A benefit of living in the Ocean City Maryland area is that in the summer we get a wide variety of musical talents play locally. Last summer I had the opportunity to see Jay Hoad play at Pickles Pub for the Kill the Spill Benefit.I was amazed at the amount of instruments he could play, he was like a one man band!

Jay Hoad is an acclaimed songwriter and performer, both as a soloist and also fronting his extremely high energy touring band. Hoad’s creative compositions blend funk, rock, reggae, latin, pop and jazz with traditional Australian influences punctuated by dynamic horn infused arrangements and unique blends of instrumentation. Jay plays up to 15 instruments throughout his shows and on his CDs including acoustic bass, electric bass, didgeridoo, dobro, lap steel guitar, 12-string guitar, ocarina and more.
Jay originally hails from South Australia where he earned a university degree in jazz performance on the acoustic and electric bass. Hoad left Australia in 2004 to tour the US and Europe with the Australian Jazz Quartet and has since performed with Dionne Warwick, the Temptations, the Drifters, Blood Sweat & Tears among others. In 2007 Jay temporarily settled in the United States to concentrate on performing and touring with his newly formed group, the Jay Hoad Band.

The Jay Hoad Band released their much anticipated multi-genre debut album “Warmth in the White” which was conceived and written while on tour in Australia and recorded in the US in early 2008. Hoad’s composition “Rat Race” received critical acclimation in the 2009 Australian Songwriter’s Association competition. Song lyrics, although delivered in a fun and exciting manner, focus on many controversial subjects including environmental issues, political contradiction and many other random observations culled from Hoad’s world travels.