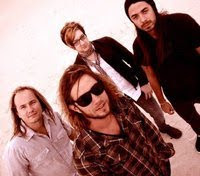 Our latest artist spotlight focuses on the Ocean City’s born and bred Lower Class Citizens. These boys have been at if for nearly a decade and represent today’s Modern Family of Rock N Rock with a capital F check them out here and listen to their latest track that we have obtained EXCLUSIVELY.

What originated as a garage band — three local boys who got together whenever they could in a Berlin workshop to jam on some punk originals — has, in a little more than 10 years, developed into one of Ocean City’s most revered musical acts.
Drummer James Armstrong, bassist Tyler Rolig and his brother, guitarist and vocalist Ryan Rolig, formed Lower Class Citizens in 1999. Now-lead guitarist Bill Todd joined the band later that year.
The group started playing original music, says Ryan Rolig, “and sometimes we mixed in some covers by Minor Threat and Sublime .” They got their first gig at the former Talbot Street Café in downtown Ocean City.

“Back then, we would play just about anywhere, anytime — house party or venue — for little or no money,” Rolig says. In time, Lower Class earned spots at the Grog and Tankard and at the Velvet Lounge in Washington, D.C., before landing a gig as the house band at The Sandbar (33rd Street) in Ocean City, where they attracted “some of the craziest crowds,” Rolig says.
Described as “an electric rock ‘n’ roll band with a big bang,” Lower Class Citizens’ sound is reminiscent of that made popular in the late 1960s and 1970s — think Led Zeppelin andBlack Sabbath — although it’s infused with each of the artists’ penchants for specific riffs, lyrics and beats.
“Most of our influences come from blues/rock bands of the early ’70s,” says Rolig, whose powerful vocals, combined with Todd’s masterful guitar work, clearly lead the group (Parliament, Miles Davis,Johnny Cash , Deep Purple, Muddy Waters andthe Misfits are listed among the band’s influences). “Some people compare us to Led Zeppelin orNirvana , but I think we have our own sound.”
With Matt Russell now on drums (“He is a good listener and brings his own style,” Rolig says), Lower Class has, in the last year, played shows in Baltimore, Annapolis and Ocean City. The band has also opened for national acts like heavy metal recording artist Clutch, and guitar legend Rick Derringer, and in March, Lower Class plans to record a new album, its fourth, tentatively scheduled for a spring release.
“The original goal for the band was to make our own music. It has always been our goal to be original, now we are trying to have people hear us,” Rolig says. “Our goal is to have our music on iTunes so people can hear it worldwide. It is important to make our music more accessible to people.”