Posted at 17:55h in Uncategorized by Natalee DeHart
0 Likes

A dumb ass groundhog in PA actually did see his shadow today. But in light of the blizzardy weather gripping 1/3 of the U.S., a meeting was held on Capital Hill to discuss the matter. Six more weeks of this shit would be bad for moral, so the Democrats introduced a bill making the groundhog personally responsible for the costs of snow removal and cleanup. The Replublicans voted against the bill and instead decided that money would be better spent to send said groundhog to Cairo to increase US presence in an unstable area of the world. The groundhog then decided that it was in everyones best interest in deny any shadow sighting and bite the man in the top hat who dragged him out of his hole in the first place.
This has not been reported on any major news networks because Fox news and CNN are busy focusing on the shortage of strippers in the Dallas/Fort Worth area for SuperBowl week, and acheiving equality for all groundhogs, respectively. 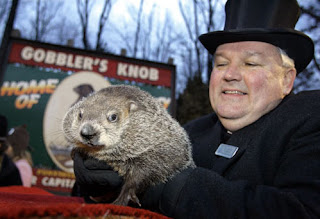