05 Jul Grimaldi is watchin my back

Posted at 17:28h in Uncategorized by Natalee DeHart
0 Likes

Person – “Who is that on your arm?” “Gabe Kaplan from ‘Welcome Back Kotter?'”
Me “no……its my buddy Jon”
Person “oh im sorry, is it a memorial tattoo”
Me “no….. its a birthday present to an different friend”
“huh…..ooookay….” person backs themselves slowly out of the room and the conversation. 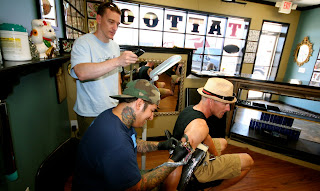 It started several years ago when my buddy Jon went to study abroad for 6 months. He is a clean cut kid from Potomac with a solid family and maybe one of the smartest people I’ve ever known. So when he came back from his trip with a full on 6″ fro and 3″ long goatee to boot, we decided to mark the occasion with a grand unveiling to friends and family complete with Tee-shirts and Stickers. 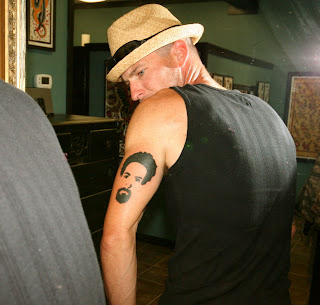 Ever since then his image became the Icon for our friends. In fact the likeness was used in an original publishing of GCFL when it was a Zine with a mailing list of a couple dozen. Later the image was transformed into the Deity of ‘Would You Rather’ A series of books published by good friend Justin Heimberg. So naturally the next logical step to immortalize this iconic image of my formative years would be to have it tattooed on me. Although it was partly a dare it was a fore gone conclusion that i would do it especially because Justin was paying for it, on his birthday. Interestingly there was more group discussion on placement i.e. where to put it so that Natalee would not have it glaring at her during times of intimacy.

There was one man for the job Little Chico – his good-hearted irreverence and equal opportunity offender policy were the right qualities for the job. Plus it was an opportunity to check out the newest Tattoo shop in the area. 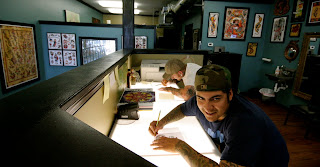 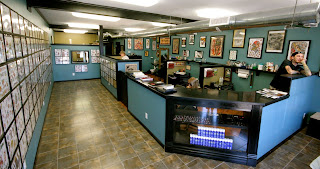 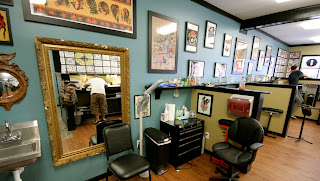 Right Coast Tattoo just opened up in Fenwick Island Delaware and is a beautiful shop in a beautiful location.
Todd Noble who has been making tattoos in the area for longer than most senior-weekers have been alive says he had his eye on this location for years and years and when it came available this spring he jumped on it. It is sandwiched very neatly between the municipality of Ocean City and of Fenwick but still being right on Coastal Highway one block from the state line. As a bonus they are neighbors with Ocean Side Deli which itself is an institution on the Delaware Shore. Todd brought his successful formula from Black Cobra Tattoo in Salisbury. It features Tattoos By Todd Noble, Little Chico, Clamore Dankmeyer. Piercing By American Dan and Kelly Gable. Jokes By Jay. The Artwork hanging on the walls is astounding and personally the Framing of the walls is pretty good too. Everyone should check them out.