Posted at 13:39h in Uncategorized by Natalee DeHart
0 Likes

Kevin , John, Scott, Casey and the old guy make up Loaded Gun Customs (LGC) . As part of the Scared Straight program I took a high schooler who loves cars but hates math up to LGC in Selbyville, DE. We wanted to get an idea of what it would be like to work in a car shop. I was expecting a fun and interesting quick visit. What I got was a brain full of images, creativity, parts, pieces, and passion. Kevin took us around the shop with the knowledge of a true pro and excitement of a kid showin off his toy collection. 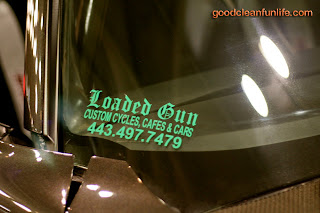 We saw every bit of what they do and have done. Kevin has an imposing physical presence but disarms you with his passion and pulls you in with his vast knowledge. Speaking at close to the speed of light and at times in a different language of numbers and letters that make up mechanic speak; you cant help but to get sucked in and excited about what they are doing ……and they do it all. cars and bikes of all models and styles – they meld them together in there own signature way ” some shops make money by picking one thing and specializing in it” – Kevin tells me “we don’t do that we don’t wanna be pigeon-holed.” Though, if I had to guess, Cafe racers might be one for them. These classic racing bikes change the way bikes were made back in their heyday. Now with the classic styling and parts fused with modern amenities they could be considered the forte of LGC. Interestingly they all seem to drive old BMWs, and there is no shortage of American muscle, hot rod and Harleys, to go with these imports. Keep in mind I know next to nothing about cars but enjoyed myself immensely talking with the guys. 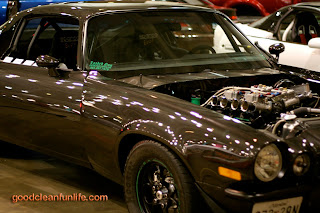 Any one should stop over there and check things out. All are welcome (from Pagans to Feds apparently) and the fact that these guys would stick around and share their knowledge with a highschool kid and me makes for a stand up group of guys. They maintain the balance of being edgy enough to have the credibility but professional enough to run a great business. I expect nothing but great things in the future from LGC